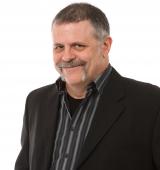 David Burdick earned his DMA from the University of Texas at Austin.  He has taught commercial music, composition, and guitar at Millikin since 1989, and is faculty adviser for the Millikin Songwriters Guild. He has recently installed and wired his own recording studio, which during its first seven months of operation released fourteen CDs. He continues to perform professionally on guitar and acoustic bass in the Central Illinois region. His last two compositions have enjoyed a number of performances around the country and his most recent piece has been performed at two festivals.