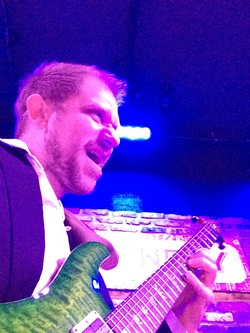 A native of Martinsville, Illinois, Nate Jackson has been a member of the Lincoln-Way District #210 music faculty since 2001, where he teaches all levels of guitar. Nate earned degrees in guitar performance from Millikin University and Northern Illinois University, as well as obtaining education certification through NIU. Mr. Jackson’s Guitar Studio Ensemble has been an annual participant of the Mid-America Guitar Ensemble Festival.  Guitar Studio has been featured in performance at the  Illinois Music Education Conference, and has toured extensively across the United States and Canada.

Mr. Jackson’s motivation for composition, born out of need and desire to create new works for performance by his Guitar Studio class, has resulted in the creation of exciting and accessible repertoire for guitar ensembles of many levels.

In addition to teaching, Nate is a sought-after professional guitarist who performs in various venues throughout the Chicagoland area. He resides in New Lenox with his family.