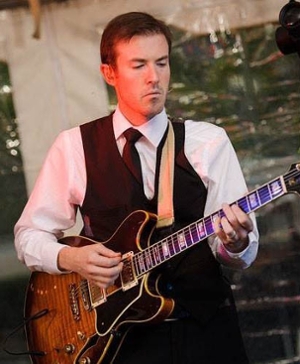 John Cardoni is an Adjunct Instructor of Guitar at Belmont University, where he teaches commercial guitar, guitar class, and performs with the Faculty Jazz Group. He came to Nashville from the Midwest, having been born in Indiana and spending most of his formative years in Central Illinois.  He earned his M.M. in Commercial Music with an emphasis in guitar performance from Belmont University in 2013. His graduate recital and research focused on exploring the music and playing styles of some of Nashville’s most prolific guitarists. He received his B.M. in Commercial Music from Millikin University in 2004. His undergraduate studies centered on both classical and jazz guitar, music theory, arranging, and recording studio work. In 2008, Mr. Cardoni joined the Millikin faculty as an adjunct guitar professor. He taught classical and commercial lessons, directed the secondary guitar ensemble, and led a pop/rock combo. He also composed and arranged multiple pieces for classical guitar ensemble. His arrangement of “O Come, O Come, Emmanuel” is featured as the title track for a 2010 Christmas album by the Millikin Guitar Ensemble.

Mr. Cardoni regularly performs across the country with Nashville-based bands and artists. Currently he works with the 12 South Band, an event/wedding band.  From 2014 to 2015 he was lead guitarist and band leader for American Idol alum Josh Gracin. He has also played alongside Amy Grant, Danny Gottlieb, Kristin Kelly, Amber Carrington (from The Voice), Maynard Ferguson, and Chuck Day. In addition, he has had the opportunity to open for Little Richard, Craig Morgan, Keith Anderson, NEEDTOBREATHE, and Blue Rodeo. So far, Mr. Cardoni has recorded nine albums with four different bands, along with various session and demo work. For six years he helped lead a 9-piece funk/fusion band out of Normal, IL, called Public Display of Funk. The band recorded three albums that featured many of his original compositions and arrangements. He recorded four more records with an original alt-country group called The Micah Walk Band while living in Springfield, IL. Mr. Cardoni believes much can be learned from all varieties of music.