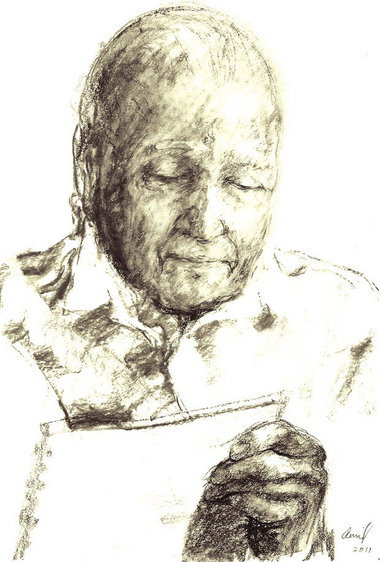 “Composer, musician and poet Edwin Frank Avril (1920-2018) was born in Queens, NY. He learned drums and piano in elementary school, and began composing around age 12, something he has continued to do throughout his life. As a teenager, he formed a swing band, The Queen’s Troubadours, and arranged and performed his original songs. In the summer he would play piano for events in the Catskill resorts. He enrolled in Oberlin college in 1942, where he majored in piano and minored in clarinet. There, he met Bela Bartok in a workshop on his new “Mikrokosmos.” Soon thereafter, he was drafted and posted in San Francisco. He played timpani, drums and clarinet in military bands and the Servicemen Symphony in San Francisco, where he played under Pierre Monteux. He played bassoon in the concert inaugurating the United Nations in 1945. He earned his Bachelor’s degree (1948) from San Francisco State, and taught music at a Sonoma high school while pursuing his Masters from Columbia University. While in San Francisco, he played bassoon in the first complete American performance of Stravinsky’s “L’Histoire du Soldat” with Stravinsky’s own manuscript. He also performed in the Broadway version of “Die Fledermaus” at the Curran Theater, conducted by Erich Korngold. In 1948 he married teacher and pianist Dorothy Avril and returned to NY to complete his Doctorate in Music Education from Columbia. There, he studied with the renowned Simon Kovar, a bassoonist with the NBC Symphony.

“After teaching high school in California and then Michigan for several years, he was appointed Professor of Music at Glassboro State College, NJ (now Rowan University). He taught music education, music theory and composition, and helped establish the Jazz department. After taking a sabbatical to UCLA to study Ethnomusicology, he established the first World Music classes at Glassboro. Throughout his long and varied career as educator and performer, he composed an impressive catalog of works for solo instruments, string quartet, accordion band, orchestra and opera: in addition, Avril wrote and arranged numerous swing-era style songs. Many of these works have been performed and recorded by students and professionals, including Englewinds (NJ). To celebrate his ninetieth birthday, fellow faculty, his family and friends performed a recital at Rowan University to feature his works for chamber music, piano, guitar and voice. He lived in Glassboro, NJ, “composing one measure a day,” until his 97th year.”